As part of the implementation of the “Excellence Initiative – Research University” program, the Medical University of Gdańsk intends to support the potential of the most outstanding scientists and teams, working in the areas identified as priority. 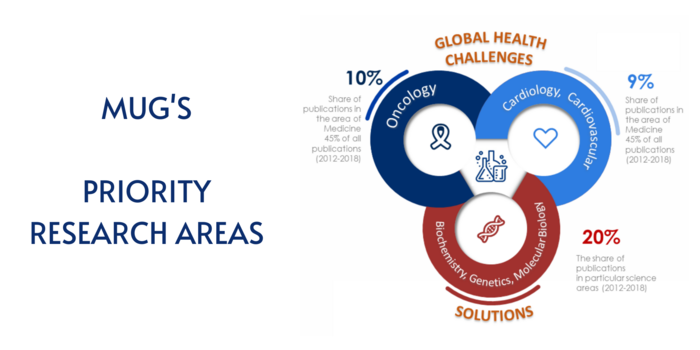 Researches conducted at Medical University of Gdańsk are within the field of medical sciences,health sciences and within the disciplines of:

Scientific activities are varied within the scope of different disciplines and research areas. The accomplishments of MUG researchers is dominated by the researches from the area of medical sciences, which results, among others, from the employment structure of the University. It has to be pointed that researches conducted in this discipline are quoted more often than the researchers conducted within the remaining disciplines. The selection of priority research areas requires an intensified analysis on the level of subdisciplines and research areas. To achieve that aim the analysis with the use of SCOPUS base was conducted.

The dominant area where the researchers from MUG created publications (in global 5265 publications in 2012-2018 in MUG) was Medicine, which constitutes over 45% of all publications of the University. The second important area is Biochemistry, Genetics and Molecular Biology with the total share of publication on the level of 20%. The consecutive areas constitute a minor share of publications. Among these disciplines one can find Chemistry (7%), Pharmacology, Toxicology and Pharmaceutics (6%), Agricultural and Biological Sciences (4%), Immunology and Microbiology (4%). The remaining areasconstitute around 14% of publications. 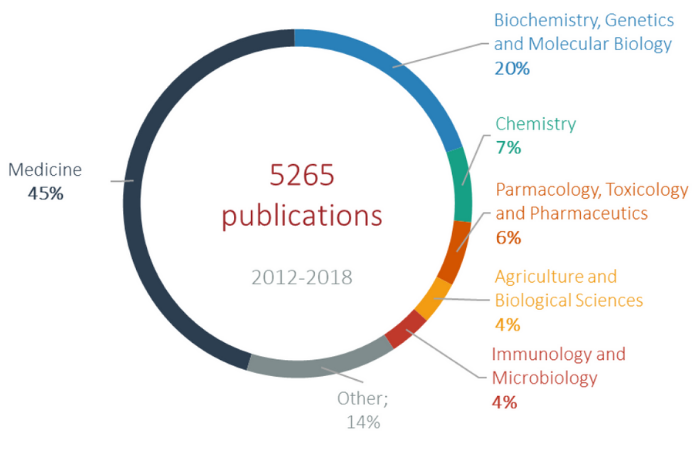 The share of publications in particular science areas in the years of 2012-2018. Education Foundation „Perspektywy”, Bureau of Rankings and Analyses, „The analysis of scientific-research potential of Medical University of Gdańsk and domestic and international benchmark of the University”, (05.2019).

The University achieves the best scientific results in two areas: medicine as well as biochemistry, genetics and molecular biology (the area connecting medical sciences and life sciences). However, it has to be pointed that medicine as a research area (in global 2369 publications in 2012-2018 in MUG) has a very broad scope and requires a more thorough analysis.

From the disciplines of the Medicine area a discipline of General Medicine should not be discussed as it is highly interdisciplinary and gathers publications from a various areas of medicine. What is worth noticing is the most represented areas: Cardiology and Cardiovascular Medicine, Oncology, Surgery and Internal Medicine, which combined constituted 30% publications from the Medicine area. 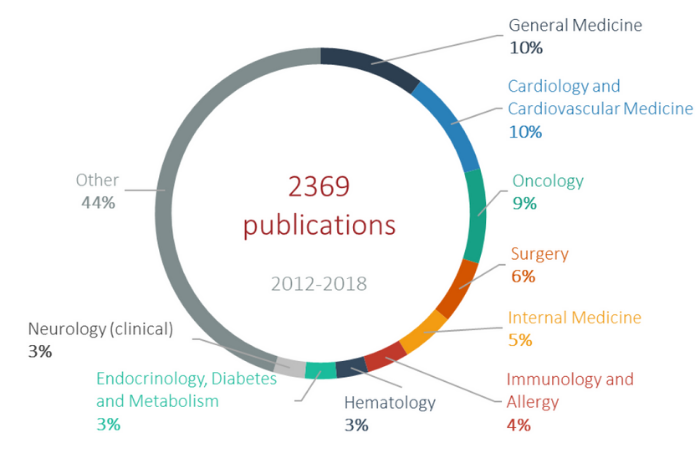 Main research areas in the range of Medicine in the years of 2012-2018. Education Foundation „Perspektywy”, Bureau of Rankings and Analyses, „The analysis of scientific-research potential of Medical University of Gdańsk and domestic and international benchmark of the University”, (05.2019).

Implementation of unique biomedical research that is important for a better understanding of the base of the disease, and its more effective treatment, e.g. evolution within cancer cells or tumor resistance to the treatment used.

Malignant tumours are among the most serious threats to the life of Poles. The total number of malignant tumours in the country in the last 40 years was growing. The number of incidences in Poland will be constantly growing, which is caused by the ageing of population as well as the risks connected to lifestyle (obesity, low physical activity, smoking, increased alcohol consumption).

Cancers are responsible for around ¼ of premature deaths in Europe and in Poland, and the share of this group of diseases in lowering of the level of health has a growing tendency. According to the data of the National Cancer Registry in Poland annually over 150 thousands of new incidences of malignant tumours are registered and over 90 thousands of new deaths due to that reason. Malignant tumours constitute the second cause of deaths in Poland.

There is no doubt that malignant tumours are a serious threat for the Polish society, cause problems on the individual level as well as on the state level and will be on the increase. The prognosis of the National Cancer Registry for the next years shows that the number of incidences and deaths due to malignant tumours in Poland will be increasing, becoming the first cause of death for both men and women before the age of 65, passing even the deaths caused by the diseases of cardiovascular system.

The importance of the issue is proved by the creation of the National Programme Against Cancer, designed for the period of 2016-2024. The control of cancers and research on the new methods of prevention, diagnosis and treatment of cancers remain in the sphere of interest of WHO.

Cardiovascular diseases are from many years the main causes of death in Poland. As in 1960 they were responsible for less than one fourth (23,4%) of all deaths in 2014 they were the causes of nearly a half (45,1%) of deaths. The rate of deaths in Poland is significantly higher than the average for the UE28 countries (38,1%).

Securing not only the more efficient treatment, effective diagnostics and prevention but also the increase in life quality of the patients, people after treatment and their families are the important social needs. The importance of the issue is proved by the creation of the Programme of Prophylaxis and Treatment of Cardiovascular Diseases POLKARD for the years of 2017-2020.

The process of development in genetics was to a significant degree related to rare and incurable genetic diseases. The latest discoveries are commonly important to a broader groups of patients, and even the whole population. The research in the sphere of human genome enable to discover the influence of genetic factors on a variety of diseases. It has to be pointed that the potential of the development of researches in genetics is still very high – we do not know yet to what purposes most genes serve and how they work.

The assessment of the social needs for the research from the scope of biochemistry, genetics and molecular biology has to take into consideration the complimentary character of such researches towards the other medical areas. The especially strong relations exist with the areas of oncology as well as cardiology and cardiovascular medicine, which may benefit from the researches concerning for example the molecular and biochemical mechanisms of cellular transport routes, identification of genetic variants responsible for initiation and progression of tumours and recognising the biochemical foundations of metabolic disorders. A firm example of the relations of these areas and MUG researches conducted within the framework of the International Research Agenda, where genetic anomalies as risks of cancers are analysed [‘Mutations acquired during lifetime that lead to increased risk for human disease, with focus on cancer’ (acronym: 3P-MedicineLab – Preventive, Personalized, Precision), leaders: Prof. Jan Dumański (Faculty of Immunology, Genetics and Pathology, University of Uppsala), and Prof. Arkadiusz Piotrowski (Department and Institute of Biology and Pharmaceutical Botany, MUG)]. 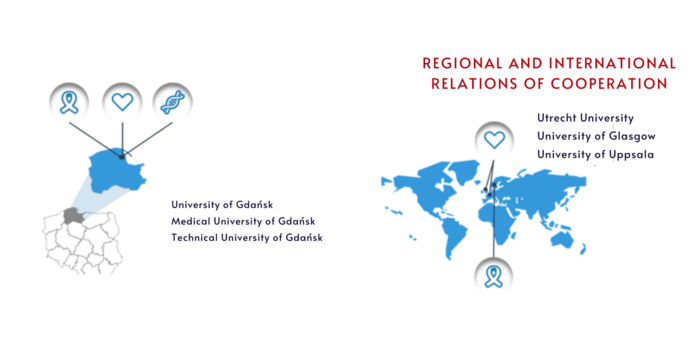 -Very important for the commercialization of research conducted by scientists, is the implementation of other specific objectives that will facilitate synergy between science and business, and will increase the interest of investors and foreign entities in cooperation with our University – adds Prof. Bączek – We are convinced that close cooperation with key Pomeranian universities – the Gdańsk University of Technology and the University of Gdańsk will facilitate research activities and allow the creation of new development and implementation mechanisms in key areas. In addition, it will increase our chances in competing for places in world rankings, comparable with the positions achieved by foreign partners of the MUG – universities from Glasgow, Utrecht or Uppsala in the field of clinical medicine.