Prof. Jacek Jassem (born in 1951) is a Professor of Clinical Oncology and Radiotherapy and (since 1990) the Head of the Department of Oncology and Radiotherapy at the Medical University of Gdansk, Poland. In 1975 he received his PhD, in 1987 a habilitation degree and in 1995 the title of professor. He undertook training at the Karolinska Institute in Stockholm, Sweden (1977) and the National Cancer Institute in Amsterdam, The Netherlands (1989-1990 and 1994). His main scientific interests are medical oncology, specifically lung cancer and breast cancer, combined modality treatment, as well as molecular oncology. He has co-authored over 800 full articles, books and book chapters in these fields, and claimed or licensed 11 patents. The cumulated impact factor of his publications is 1960, with over 19,000 citations and h-index of 55 (Web of Science, viewed May, 2019). He is the recipient of a number of Polish and international scientific awards, including Polish Prime Minister’s Scientific Award, President of Vienna Foundation Award, Sobolewski Award of the Polish Oncological Society, Joseph W. Cullen Prevention/Early Detection Award of the International Association for the Study of Lung Cancer Hevelius Award of the President of Gdańsk, and the Outstanding Pole Award. He is a member of the Academia Europea, European Academy of Cancer Sciences and the Polish Academy of Art and Sciences. He has served in a number of different editorial boards including Lancet Oncology, European Journal of Cancer, Cancer Treatment Reviews, Radiotherapy and Oncology and Journal of Thoracic Oncology. He is a past chairman of the European Organisation for Research and Treatment of Cancer (EORTC) Breast Cancer Group and the EORTC Executive Committee, a past chairman of the American Society of Clinical Oncology International Affairs Committee, a past member of the executive boards of European Society of Therapeutic Radiation Oncology and European Society of Medical Oncology and a past president of the Polish Oncological Society. Prof. Jassem is the chairman of the Central and East European Oncology Group and the Polish Cancer League. He has been involved with several nationwide public health initiatives, such as authoring the Polish anti-tobacco legislation to limit smoking in public places (introduced in 2010) and the coordination of Cancer Control Strategy for Poland 2015–2024.

- Oncology at MUG in view of other domestic medical universities stands out significantly, being a domestic top. In the number of publications (467) MUG lies second in Poland only behind the Medical University of Poznań (625), but beating all polish medical universities in the citations number (MUG – 10,3 thousands citations, Medical University of Poznań – 7,2 thousands of citations). Citations coefficient for one MUG publication amounts 22,0 while the average coefficient for EU countries in oncology amounts 14,5;

- Researches in the scope of oncology in a significant part are conducted in cooperation with international facilities – over half of the publications in the years of 2012-2018 (53%) was created in the result of such cooperation. The most cooperating institutions come from the USA (101), France (60), and Great Britain (58). What is important is the fact that the cooperation has a developing character – in 2013 40% of publications was created in cooperation with authors from abroad, and in 2018 it was 62%. MUG has the strongest connections with the French universities Universite Paris-Saclay and Institut Gustave Roussy as well as with KU Leuven; 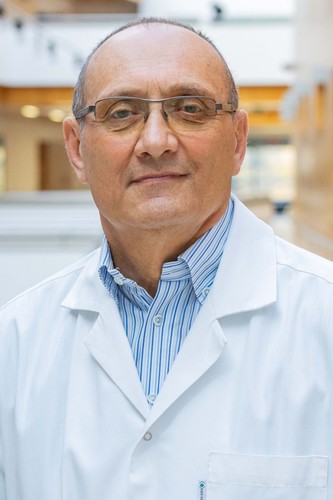