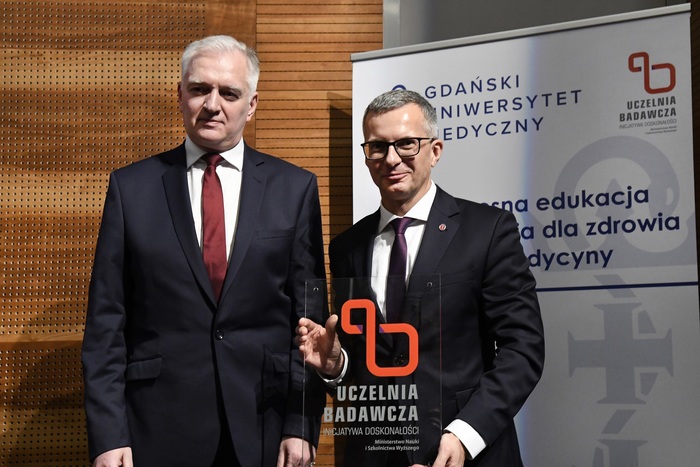 The Minister of Science and Higher Education Jarosław Gowin and the Rector of the Medical University of Gdańsk Prof. Marcin Gruchała M.D. Ph.D during the ceremonial inauguration of the "Excellence Initiative - Research University" program. Gdańsk, 29.01.2020

The Medical University of Gdańsk – as the only medical university in the country – has been selected to the elite group of the top 10 best Polish universities awarded in the prestigious competition of the Ministry of Science and Higher Education “Excellence Initiative – Research University”. According to the project, MUG intends to intensify its scientific activity in three priority research areas, which include: oncology, cardiology and cardiovascular medicine as well as biochemistry, genetics and molecular biology. These areas were selected through an in-depth analysis of scientific and research potential prepared by external experts. The used methodology took into account, among others: industry rankings, cooperation with renowned research centers, the number of prestigious international publications, the quality and effectiveness of research, the level of internationalization and modern research infrastructure. Such a profiled range of activities will realistically provide the MUG with the greatest opportunities to increase the impact of its scientific activities in the development of global science.

The MUG is one of the best medical universities in Poland, a university with dynamic interdisciplinary research development in recent years, often with a significant participation of international cooperation.

- Our University is characterized by high scientific and development potential, which particularly includes: experienced and reputable research teams, an increasing number of prestigious international publications and awarded grants, as well as a wide range and quality of research, confirmed by the high categorization of research units – said the rector Prof. Marcin Gruchała. M.D., Ph.D. – The university’s competitiveness on the national and international arena is demonstrated by modern infrastructure, created on the basic models from leading international research centers, as well as long-term cooperation with renowned scientific institutions with great potential for further development.

Obtaining the status of a research university is a confirmation of the leading position of the Medical University of Gdańsk in the field of scientific research, development and implementation, as well as an impulse to compete with leading centers in Europe and around the world. Thanks to the status of a research university, the MUG in the years 2020-2026 will receive a subvention increased by 10 percent, which in total will translate into the amount of approximately PLN 100 million , i.e. PLN 14.5 million every year for 6 years, from the central budget. 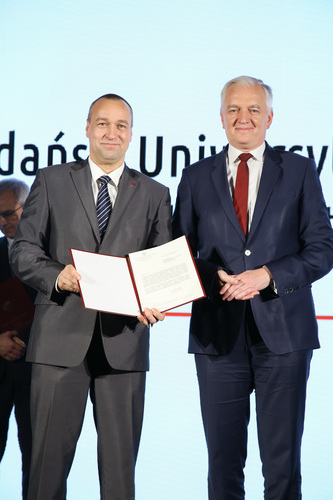 The MUG Vice-Rector for Science Prof. Tomasz Bączek Pharm.D. and the Minister of Science and Higher Education Jarosław Gowin, during the results announcement of the first edition of the „Excellence Initiative – Research University” program. Warsaw, 30.10.2019

The program is one of the most important initiatives included in the Constitution for Science. The goal was to select and support universities that will strive to achieve the status of a research university, and will be able to successfully compete with the best academic centers in Europe and around the world. From among 20 universities in Poland authorized to take part in the competition, the top 10 were selected, and in years 2020-2026 will receive a subvention increased by 10%. Development plans, which are a key element of the applications submitted by the universities, included goals and actions that will increase the level of scientific research and the quality of education, and as a result contribute to the international significance of the institution. Universities were evaluated by an international team of experts, from the science and higher education sector.

– I wish to congratulate the MUG for its spectacular success. The Medical University of Gdańsk has seized the opportunity granted by the excellence initiative and conducted a thorough analysis of the strengths and weaknesses of the university. Your institution was selected by an international team of experts, which included the former rectors of leading European universities, former ministers and outstanding scientists representing all fields of science. – said the Minister of Science and Higher Education Jarosław Gowin.