The Ceremonial Inauguration of the "Excellence Initiative - Research Uni...

The Ceremonial Inauguration of the "Excellence Initiative - Research Uni...

The Ceremonial Inauguration of the "Excellence Initiative - Research University" Program

The Medical University of Gdańsk – as the only medical university in the country – has been selected to the elite group of the top 10 best Polish universities awarded in the prestigious competition of the Ministry of Science and Higher Education “Excellence Initiative – Research University”. The inauguration took place on January 29, 2020 at the Medical University of Gdańsk. The event was attended by, among others: Minister of Science and Higher Education Jarosław Gowin, Secretary of State in the Ministry of Health Józefa Szczurek-Żelazko, Undersecretary of State in Ministry of Science and Higher Education Anna Budzanowska and Małgorzata Zadorożna, director of the Department of Medical Qualifications and Science at the Ministry of Health. Also deputies of the Sejm of the Republic of Poland, Pomeranian Voivode Dariusz Drelich, representatives of provincial organizational units: Director of the Pomeranian Provincial Branch of the National Health Fund, Director of the Regional Center of Blood Donation and Blood Treatment and the Pomeranian Provincial Sanitary Inspector, representatives of local governments, rectors of University from Pomeranian Region, headed by the chairman Paweł Orłowski, the MUG Senate, Faculty Councils, the Social Council of The University Clinical Centre, research, teaching and administration staff, as well as students and doctoral students were present.

– I wish to congratulate the MUG for its spectacular success. The Medical University of Gdańsk has seized the opportunity granted by the excellence initiative and conducted a thorough analysis of the strengths and weaknesses of the university. Your institution was selected by an international team of experts, which included the former rectors of leading European universities, former ministers and outstanding scientists representing all fields of science. – said the Minister of Science and Higher Education Jarosław Gowin.

The MUG is one of the best medical universities in Poland, a university with dynamic interdisciplinary research development in recent years, often with a significant participation of international cooperation. The Medical University of Gdańsk is characterized by high scientific and development potential, which particularly includes: experienced and reputable research teams, an increasing number of prestigious international publications and awarded grants, as well as a wide range and quality of research, confirmed by the high categorization of research units. The university’s competitiveness on the national and international arena is demonstrated by modern infrastructure, created on the basic models from leading international research centers, as well as long-term cooperation with renowned scientific institutions with great potential for further development. Obtaining the status of a research university is a confirmation of the leading position of the Medical University of Gdańsk in the field of scientific research, development and implementation, as well as an impulse to compete with leading centers in Europe and around the world.

- We are incredibly proud of the success achieved, that as the only medical university we have obtained the status of a research university – said the rector of the MUG, Prof. Marcin Gruchała. M.D., Ph.D.- The fact that there are four medical universities in the top twenty proves the level of Polish medical sciences. Today domestic medicine is known to a well-known degree on the international arena, both in terms of research, as well as clinical and teaching successes.

Acording to the assumptions of the project, the University intends to intensify its scientific activity in three priority research areas, which include: oncology; cardiology and cardiovascular medicine as well as biochemistry, genetics and molecular biology. Such a profiled scope of activity will provide the MUG in a real way with the greatest opportunities to increase the impact of scientific activity on the development of world science.

As part of the implementation of the “Excellence Initiative – Research University” program, the Medical University of Gdańsk intends to support the potential of the most outstanding scientists and teams working in the areas recognized as priority areas. Important are the new organizational solutions in particular the development of core facilities. The possibility of cooperation of specialists from various disciplines, environments and countries in one place will contribute to strengthening the research potential of the MUG, as well as increasing the importance and range of impact of research carried out at the University. Working on powerful, recognizable scientific achievements, in particular in the field of clinical medicine (with a focus on oncology and cardiology), the MUG strengthens effective intra-university cooperation between the most ambitious clinicians and modern researchers in the areas of basic sciences: biochemistry, molecular biology and genetics.

- Several years ago, we started a discussion on how to conduct scientific research to make it more effective. The initiating point for changes and the exit from our research groups individually considered for greater cooperation was the initiative to establish the Translational Medicine Center in 2014 – said Prof. Tomasz Bączek, vice-rector for science. – Thanks to gathering the best and the most modern equipment in one place, which will serve not only specific units, but all employees who want to implement innovative research projects, we can use the dispersed potential of individual research groups in the areas of research and development activities strategic for the University.

Closer cooperation with leading universities in the region, will develope greater chances of the University in competition for ranking positions at levels comparable to the positions achieved in the field of clinical medicine by partner centers from Glasgow, Utrecht or Uppsala, recognized by the MUG as exemplary reference universities. Also important is the cooperation between the MUG and The University Clinical Centre.

- From the national perspective, by winning the competition with many prestigious multi-profile universities, the achievements of the Medical University of Gdańsk arouse respect and scientific respect – said Józefa Szczurek-Żelazko, secretary of state at the Ministry of Health. – The development of medical sciences and health sciences is always connected with medical practice and treatment of patients. The authorities of the Medical University of Gdańsk, as well as the scientific community of the University, are fully aware of this interdependence – the coexistence of scientific research and medical practice.

The program will be strengthened by the reform of the organizational culture. There will be a program implemented to ease the administrative burden on researchers themselves, giving them more time for research. As part of the digitization and automation of administrative processes a new, dedicated administrative center and a new management system will be created. As part of the improvement of the possibility of commercialization of scientific research results, reinforced structures of the Incubator and the Innovation Accelerator will be created.

A chance for successful implementation of tasks is the establishment of the First Doctoral School within the structures of the Medical University of Gdańsk with a new education program, which also includes the recruitment of candidates from abroad. This will enable the didactic offer to be adjusted to the requirements of priority research areas and easier access of international doctoral students to the research-oriented program offered in English. The University intends to focus its activities on the comprehensive development of science, didactics and academic staff, including young scientists, who carry out tasks in the field of priority research areas. This is to be achieved by the simultaneous improvement of the quality and internationalization of the teaching offer, as well as the significant increase in the share of foreign partners in teaching the most talented students and doctoral students of the MUG.

During the ceremony, Minister Gowin gave the rector of the MUG, Prof. Marcin Gruchała. M.D., Ph.D. a symbolic sign with the Program logo. Thanks to obtaining the status of a research university, the MUG will receive a 10% increase in a subsidy from the central budget, which in total will sum up to the amount of approximately PLN 100 million. 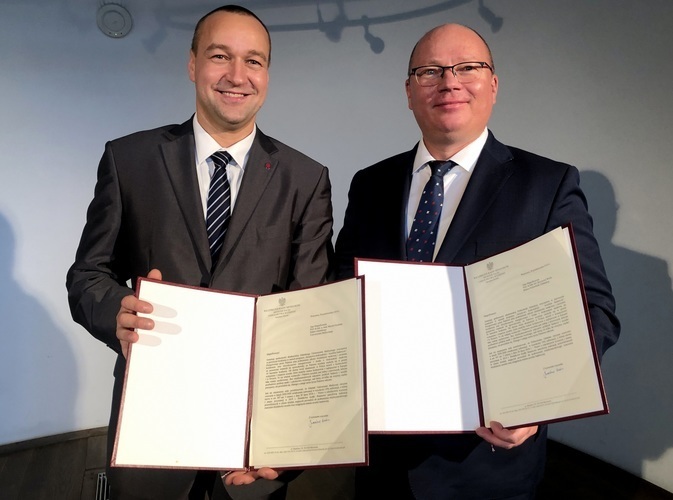 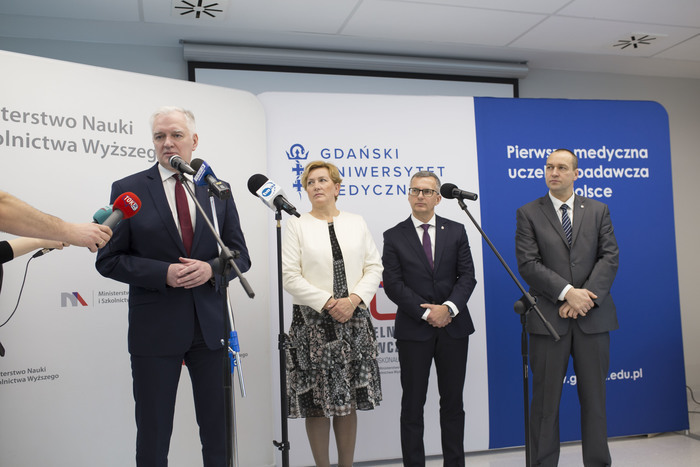 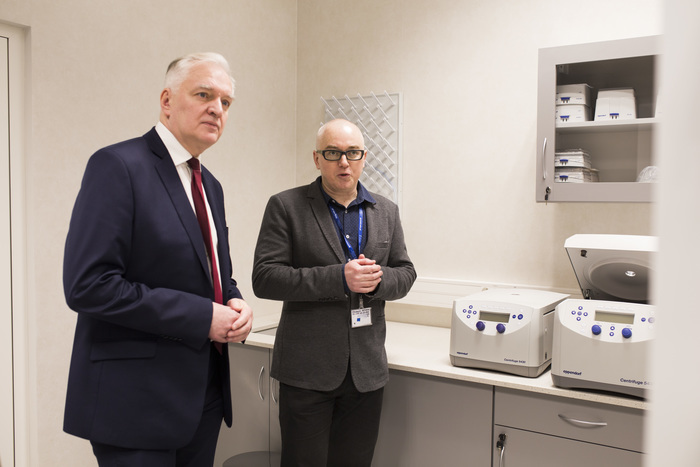 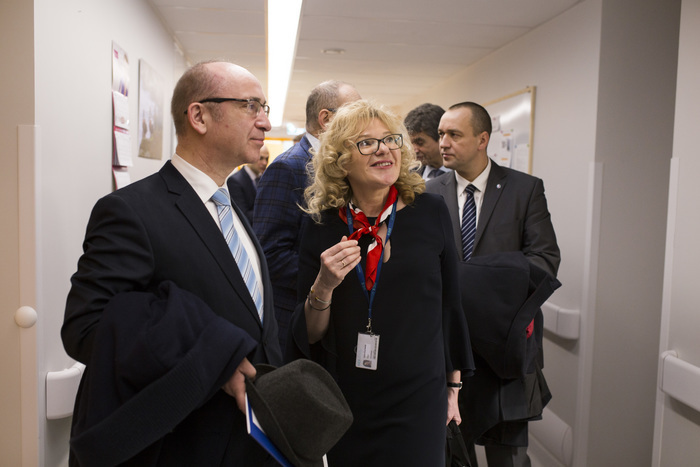