One year has passed since the selection of the 10 best Polish universities in the “Excellence Initiative – Research University” competition. The actions taken in the distinguished academic centers were discussed during the first reporting session, which took place on September 15-16, 2020 in Warsaw. The meeting was held together with the University of Warsaw as part of the NKN Forum. It was attended by Minister of Science and Higher Education Wojciech Murdzek, Deputy Minister Anna Budzanowska, and Prof. Lauritz Holm-Nielsen, chairman of the international team of experts who evaluated the contest participants. The Medical University of Gdańsk was represented by the Vice-Rector for Science, prof. dr hab. Michał Markuszewski, Pharm.D. and prof. Tomasz Bączek, Rector’s Plenipotentiary for the “Excellence Initiative – Research University” Program, Head of the Office for the “Excellence Initiative – Research University” program.

The premise of the conference was to present the activities undertaken as part of the implementation of IDUB projects. In the group of international experts, university representatives had the opportunity to share their experiences and discuss the challenges and successes of the past year. Professor Tomasz Bączek was one of the panelists in the discussion on the interinstitutional cooperation on the national and international forum. Good practices were also shared by representatives of the Gdańsk University of Technology and the Jagiellonian University in Kraków. 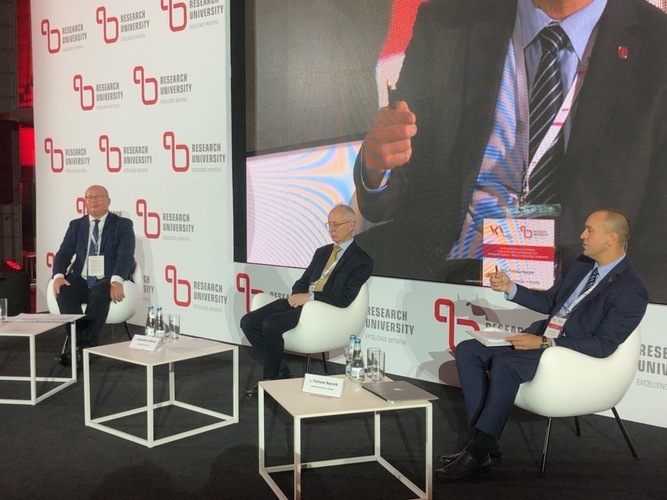 As pointed out by the Ministry of Science and Higher Education, the “Excellence Initiative – Research University” program is one of the most important aspects of the reform of higher education and science, which has been implemented for two years. This program is unique in many aspects. Firstly, submitting applications for the program was preaspeceded by the universities themselves carrying out thorough analyzes of their strengths and weaknesses. On the basis of these analyzes, schools themselves developed development plans that would most effectively contribute to their achievement of research university status. Regardless of the final results, all schools, apart from meeting the strict conditions for participation in the competition, have also acquired know-how about the strengths and weaknesses of the university, which is invaluable for effective management. Those who did not qualify for the top ten and did not win a 10% increase in subsidies also benefited financially. They have a guaranteed increase in the subsidy amounting to 2% of the subsidy from 2019. Secondly, applications submitted by universities were assessed by an international team of eminent foreign experts, including former rectors of leading European universities. Their commitment and competences continue to serve the participating universities.

- The scale of the program is also unprecedented. The budget of the program forzanza the next 7 years is about PLN 3.5 billion – said Minister Wojciech Murdzek. – The scale of funding is unprecedented in the Polish system of higher education and science, but the university’s action plans are a long-term commitment, going beyond the term of office of the rectors. They should lead to fundamental qualitative changes in universities and will be subject to rigorous evaluation – pointed out the Minister.

Videos from the opening ceremony and panels are available on the NKN website.